Bruges - Cologne,  shortest ca. 315 km (196 miles), longest ca 374 km (232 miles)
This fantastic formular of living on a boat and cycling through the countryside is now available in a 11-days tour, from the North Sea coastal zone to the European inlands. Enjoy the differences in landscape and culture of three countries Belgium, Netherlands and Germany. A great variety of experiences is waiting for you. Historic Bruges, Ghent and the rural landscape of Flanders; Middelburg, the Delta Works and the green islands of Sealand; the panoramic dikes of the Dutch Rhine and the ondulating wooded lands around Arnhem; the flat countryside of populateted German lower Rhine area with interesting Cologne, Düsseldorf and Bonn. Exept for historical innercities all the cycling can be done on bikelanes or quiet countryroads. 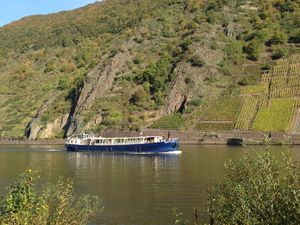 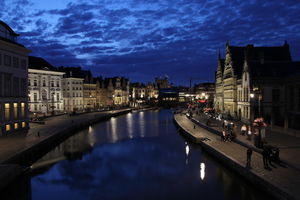 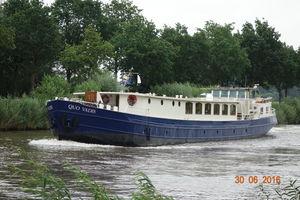 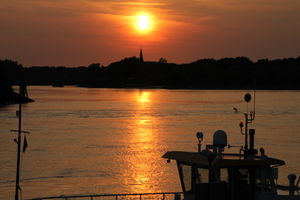 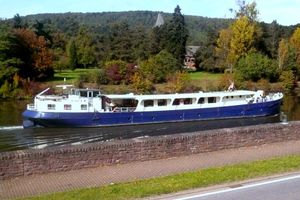 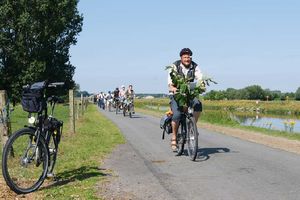 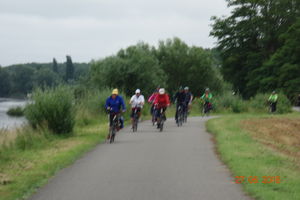 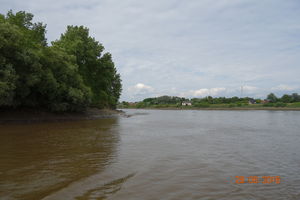 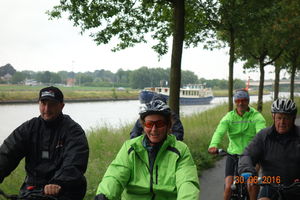 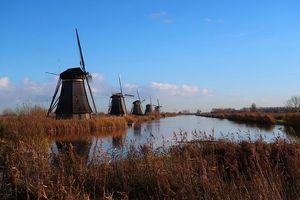 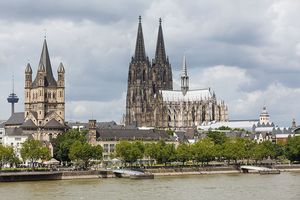 Day 1. Arrival in Bruges.
Your cycling adventure starts in Bruges, one the most beautiful of all Flemish cities. In old times it was an international metropolis and center of commerce and art. A completely intact medieval town remained, combined with some fine baroque and gothic revival architecture. With its ramparts, gates and decorated gabels mirroring in the canals, a UNESCO World Heritage Site.

We hope you can arrive at 3 in the afternoon, to check in, meet the crew and try out the bikes. And with silent canals in night lighting the evenings in the Venice of the North have even more atmosphere

Day 2. Bruges – Ghent, 48 km/ 30 miles.
Our first ride in a group takes the shortest way to Ghent, this beautiful historic town deserves an afternoonvisit. Easy cycling on quiet roads with canalviews and little bikeroads between bushes will bring us along hamlets, villages and single houses sometimes in very personal architecture. And we see memories of the battle near Moerbrugge in WWII.

Ghent is proud of its rich heritage, and much more than a museum town. More lively with locals,  this second Flemish town has an excellent mixture of medieval buildings, stylish shopping streets, early modern architecture, gothic churches with striking baroque interiors and several squares with numerous terraces. The cathedral is impressive and shows the famous Ghent altarpiece, finished in 1432; and a boatride gives beautiful sights. The Quo Vadis is moored on a short ride a bit south of a center, close to the university and museum quarter.

Day 3. Ghent – Sas van Ghent – Middelburg: 48 or 53 km, 30 or 33 miles.
First a sailing breakfast, while we cross the border. An inland route first remains in the deserted border area along Belgium castle Boekhoute and the Dutch small fortress town IJzendijke. A more seaside route leads through mussel village Philipine, remains of once prosperous Biervliet and along the sandbanks of the Wester Scheldt, the gateway for Antwerp harbour. You might spot some seals.

The Breskens ferry acros the Scheldt mouth brings us to the former island of Walcheren, with Flushing,  historical navy harbour from where in the English-Dutch wars attacks on London were made. The Quo Vadis waits for us in attractive Middelburg, dominated by the 12th century abbey from where monks started landwinning around their island; later the town was a prosperous trading center, second in the Dutch republic.

Day 4. Middelburg – Veere – Zierikzee: 53 or 40 km, 33 or 25 miles.
Today we have a spaceful ride between sea and sky in the delta of Rhine, Maas and Scheldt rivers. Although the different islands got connected, in the past with landwinning and after the big flood disaster of 1953 with huge dams of the Delta Works, they all have retained their own character. One of the higlights of this tour is the Eastern Scheldt storm surge barrier, the most impressive construction of the Delta Works.

First we visit charming Veere, a small historic harbour with old Scottish connections; the long trackers by bike, the short starts biking in Veere. Both routes visit the storm barrier with Neeltje Jans, a raised sand flat to facilitate the construction of the barrier, that allows tidal inlets for maintaining the original water environment with oyster and mussel farming. Not only the locks from up close are worth seeing, but also the interior.

The shorter track goes back to Beveland, gives a beautiful ride along the coast of the Eastern Scheldt, along fishing village Colijnsplaat with a reconstruction of a Celtic temple that was found here; and a spacy experience on the Sealand bridge, in the 60-ties the longest of Europe. The longer route continues via the storm barrier to island Schouwen, with fortress Burgh, along wetlands at the Scheldt banks with the lonely tower of disappeared Stompetoren and historic circular village Serooskerke. The Quo Vadis can be found in Zierikzee, dominated by the ‘Fat tower’; once a rich trading-port with a beautiful harbour and lots of monuments.

Day 5. Zierikzee – Willemstad – Dordrecht: 54 or 40 km, 34 or 25 miles.
Today we travel from Sealand towards Holland. The long trackers can first visit on the Inundation museum, housed on a deserted spot in 4 huge boxes used to restore the dikes after bombings in World War II; and pass fishing village Bruinisse. We have a beautiful tour on the open land between sky and sea of island Overflakkee with Oude Tonge, this small watersports village was badly impacted by the 1953 flood catastophe. 305 People were buried in a mass grave near the dike just outside the village.

The short trackers stay on board till St. Philips island, and start for a nice tour on the fields of Brabant, along silent treelined dikes with old ribbonlike hamlets, a liny lock settlement and lively small market town Dinteloord. We will meet each other in Willemstad, a small historic garrison town with fortifications symbolising the old Dutch republic. The Quo Vadis brings us during dinner to the center of interesting Dordrecht, the oldest city of Holland once an important market because of its strategic position, and where the Dutch State was announced in a confiscated monastery.

Day 6. Dordrecht – Alblasserdam – Nieuwpoort  – Vianen – Wijk bij Duurstede: 34 or 54 km,  21 or 34 miles.
Today we take the ferry for the Alblasserwaard, a fenland between main streams. Many inundations and sinking grounds made water management essential. Canals and ditches were dugged and windmills constructed for pumping water, in Kinderdijk remain 19 mills in impressive rows. Via an inland bikeroad we reach a cheesefarm to visit. You will enjoy the lovely scenery with water and meadow birds. The route continues this scenery via hamlet Donk and the mills of Groot Ammers, and finishes for the short trackers on the Quo Vadis in Nieuwpoort; a charming liny town around a dam.

The long trackers continue with a ferry to silvertown Schoonhoven, with a leaning tower and a weighthouse build over a canal. Followed by a long seperate biketrack along characteristic old farms and between village gardens and passing the Dutch geographic centre. Another ferry takes us to Vianen, from where we have a sailing dinner on the Quo Vadis to Wijk bij Duurstede. This charming little town deserves a walk with a hidden ruined castle and a gate under a windmill; Ruysdael painted the second one, now lost.

Day 7. Wijk bij Duurstede – Rhenen – Arnhem: 29, 38 or 56 km; 18, 24 or 35 miles.
A sailing breakfast brings to Rhenen, little town with impressive tower, for cycling along the slopes of the morains causing the big curve in the Rhine near Arnhem. First the 2 shorter routes follow lower roads between floodplains and hills to meet Wageningen, our smallest university town where the peace of WWII was signed. It has a lively marketplace, a huge sculpture collection and a nice arboretum on a terrace overlooking the river. Also Doorwerth castle is beautiful located, oldest parts from 13th century; on the courtyard is a thick trunked Robinia tree, the oldest of the country. Oosterbeek, once the centre of our first open air landscape painters, has a little 10th century church; used as a hospital during the 1944 Arnhem battle.

The longer route goes in Oosterbeek slowly climbing inland to have a nice undulating ride along sloping woods and parks, and visit the Dutch heritage museum; a nice collection of different traditional buildingtypes from all over the country. And the longest route sets of at Rhenen, directly inland through the forest of the Hoge Veluwe and can visit the Kröller Müller museum; with one of the best collections of early modern and recent Dutch art, with some fine Van Goghs and a sculpture park, an Art Deco palace and an original presentation of natural history. We find the Quo Vadis downtown Arnhem, at the banks of the Rhine close at the little Airbornemuseum near the John Frostbridge. Because of the bombings this province capital has a mix of historical buildings and some nice architecture of the 60-ties.
Today you will have a big choice of restaurants for our dinner out.

Day 8. Arnhem – Emmerich – Rees – Ruhrort: 44 or 54 km, 28 or 34 miles.
Today we cycle the last part in the Netherlands via quiet dikes at the left Rhinebank, and after castle Doornenburg we take a ferry direction German border. There we can visit Kleve with legendary castle Schwanenburg  and a baroque park that inspired Berlin Tiergarten. The short track leads further via Germans longest suspension bridge to Emmerich, where the Quo Vadis is waiting.

Long continues, passing revival gothic Moyland castle, to Kalkar historic center with 7 beautiful altarpieces in the church; and is known for a theme park in a former nuclear power plant outside at the Rhinebank. On board at Rees we will have a sailing dinner on the Quo Vadis, arriving late in Ruhrort; opposite to Duisburg at the mouth of river Ruhr.

Day 9. Ruhrort – Düsseldorf: 42 or 52 km, 26 or 33 miles
We start in the Ruhrharbour; the port for the dense populated Ruhr area that was infamous for its polluting coalmines and steelfactories, and were closed during the last 20 years. Since then heritage is restored, museums were opened and green parks created. We can see some of these changes in nearby Duisburg.

The long route continues to Moers, friendly town with Arts & Crafts architecture and a model workers settlement; and meets the short one in Linn, tiny historic town with a castle build from 13th to 17th century, and a luxurious 18th century ‘hunting lodge’; both can be visited. After this we take a ferry to visit charming Kaiserswerth, with the impressive millennium old ruins of legendary Barbarossa castle.

We find the Quo Vadis just before the center of Düsseldorf, capital of the state Nordrhein-Westfalen and one of the main German centers of visual arts. Besides museums and academies there are wealthy shopping streets with fine modern architecture and a cosy ‘Altstadt’ with many venues.

Day 10. Düsseldorf – Zons – Cologne: 40km/ 25 miles or 30km/ 19 miles.
This morning we have a sailing breakfast, getting off near fortress Zons with its picturesque streets. We still are in the industrial zone, which gives good cycable roads through green zones between chemical plants, little villages and suburbs. The longer route leads via the ferry to the other Rhinebank and passes along Monheim with a little Altstadt and estate Marienburg, Wiesdorf with a Bayer workers settlement and Japanese garden, charming historical village of Flittard, and approaching Cologne via the Hohenzollern bridge, at its most impressive side.

Those who want to be earlier in Cologne remain on the left bank, and have a foretaste with the picturesque located romanesque church of Rheinkassel. Cologne, founded in Roman times and once a seat of a mighty bishopric, had great damage in WWII; in spite of that it still has the spectacular gothic cathedral, 12 beautiful romanesque churches, several other historical monuments and a lively cosy citycenter.

Day 11. Departure from Cologne, after breakfast, around 9 it is time to say goodbye. 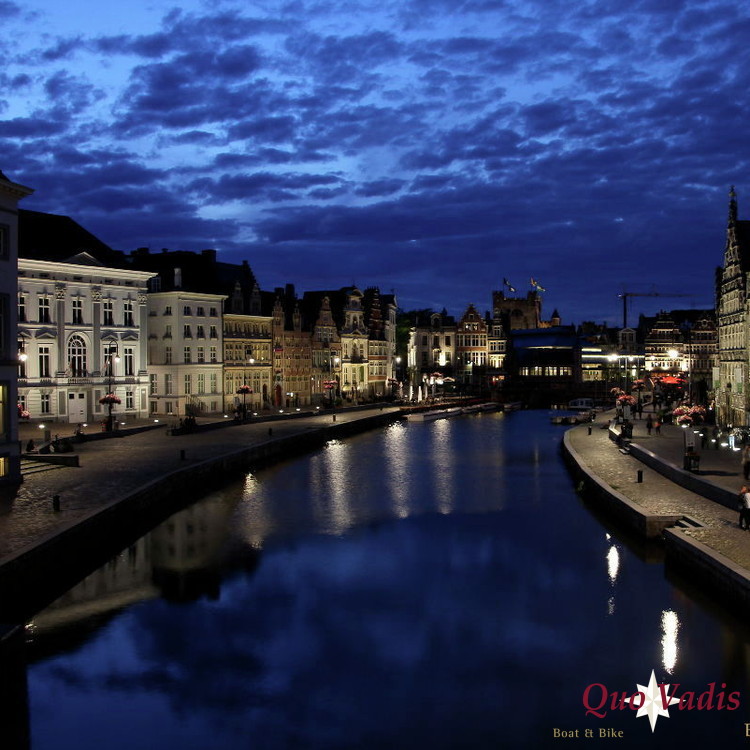 Groningen berth opposite Oosterhaven No. 7